Trials as Part of God's Mission 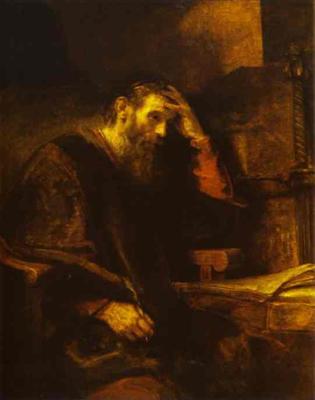 I hope you and your family are doing well during this crisis we find ourselves in. The shared experience of getting through the coronavirus pandemic has been an important theme of many Christian messages over the past weeks. Indeed, people are facing real threats such as losing their job or having their health threatened. This devotional focuses on how these real threats can deter us from God’s mission. That we should see such trials as part of God’s mission is the main theme of this devotional. I hope it will give you comfort and food for thought and serve as a reminder that we are all being made daily in the image of God.

The Treasures of Paradise

The following is excerpted from the preface that John Calvin wrote to a French translation of the New Testament by Pierre Robert Olivétan.  Olivétan was a cousin of Calvin and many think he was the driving influence behind Calvin’s conversion.  This French NT was published in 1535 and so Calvin could have been no more than 26 when he penned this preface and he was still living in France at the time.  The text below has not been changed, but it has been excerpted and reformatted to highlight Calvin’s poetic manner of writing.  It should be read slowly and out loud if possible.

The full preface can be found in the following compendium:

It can also be found online at:

May you be blessed as you meditate on this.  Prepared by Richard Davis in 2013.

everything is useless and vain;

we are not Christians;

all riches is poverty,

all wisdom folly before God;

strength is weakness, and

all the justice of man is under the condemnation of God.

But by the knowledge of the gospel we are made

fellow townsmen with the saints,

citizens of the Kingdom of Heaven,

heirs of God with Jesus Christ,

the poor are made rich,

The gospel is the Word of life and truth.

It is the power of God for the salvation of all those who believe;

and the key to the knowledge of God…

when you hear that the gospel presents you Jesus Christ

in whom all the promises and gifts of God have been accomplished;

and when it declares that He was sent by the Father,

has descended to the earth and

spoken among men perfectly all that concerns our salvation,

— as it was foretold in the Law and to the Prophets —

it ought to be most certain and obvious to you

that the riches of God have been exhibited and eternal life itself revealed.

For, this is eternal life;

to know one, only true God, and

Jesus Christ whom he has sent,

whom He has established as

the beginning, the middle, and the end of our salvation.

Christ is Isaac, the beloved Son of the Father who was offered as a sacrifice,

but nevertheless did not succumb to the power of death.

He is Jacob the watchful shepherd,

who has such great care for the sheep which He guards.

He is the good and compassionate brother Joseph,

who in His glory was not ashamed to acknowledge His brothers,

however lowly and abject their condition.

He is the great sacrificer and bishop Melchizedek,

who has offered an eternal sacrifice once for all.

He is the sovereign lawgiver Moses,

writing His law on the tables of our hearts by His Spirit.

He is the faithful captain and guide Joshua,

to lead us to the Promised Land.

He is the victorious and noble king David,

bringing by His hand all rebellious power to subjection.

He is the magnificent and triumphant king Solomon,

governing His kingdom in peace and prosperity.

He is the strong and powerful Samson,

who by His death has overwhelmed all His enemies.

It follows that every good thing we could think or desire

is to be found in this same Jesus Christ alone.

captive, to deliver us;

condemned, to absolve us;

He was made a curse for our blessing,

sin offering for our righteousness;

marred that we may be made fair;

He died for Our life; so that by Him

fury is made gentle, wrath appeased,

sadness made merry, misfortune made fortunate,

damnation damned, the abyss sunk into the abyss,

In short, mercy has swallowed up all misery, and

For all these things which were to be

the weapons of the devil in his battle against us, and

the sting of death to pierce us,

are turned for us into exercises which we can turn to our profit.

If we are able to boast with the apostle, saying,

O hell, where is thy victory?

O death, where is thy sting?

it is because by the Spirit of Christ promised to the elect,

we live no longer, but Christ lives in us.

And we are by the same Spirit seated among those who are in heaven,

so that for us the world is no more, even while our conversation is in it;

country, place, condition, clothing, meat, and all such things.

comforted in tribulation, joyful in sorrow,

glorying under vituperation, abounding in poverty,

warmed in our nakedness, patient amongst evils,

This is what we should in short seek in the whole of Scripture:

truly to know Jesus Christ, and

the infinite riches that are comprised in Him and

are offered to us by Him from God the Father.

If one were to sift thoroughly the Law and the Prophets,

he would not find a single word which would not draw and bring us to Him.

And for a fact,

since all the treasures of wisdom and understanding are hidden in Him,

there is not the least question of having, or turning toward, another goal;

not unless we would deliberately turn aside from the light of truth,

to lose ourselves in the darkness of lies.

rightly does Saint Paul say in another passage

that he would know nothing except Jesus Christ, and Him crucified.

although mean and contemptible to the mind of the flesh

is nevertheless sufficient to occupy us all our lives.

And we shall not waste our time

if we employ all our study and

apply all our understanding to profit from it.

What more would we ask for, as spiritual doctrine for our souls, than

to know God, to be converted to Him, and

to have His glorious image imprinted in us,

so that we may partake of His righteousness,

to become heirs of His Kingdom and

to possess it in the end in full?

But the truth is that

from the beginning God has given Himself, and

at present gives Himself more fully,

that we may contemplate Him in the face of His Christ.

even in the smallest degree by this or that.

our minds ought to come to a halt at the point

where we learn in Scripture to know Jesus Christ and Him alone,

who contains in Himself all perfection.

It is the will of the Lord of lights

by his Holy Spirit,

by means of this holy and saving gospel,

to teach the ignorant,

to strengthen the feeble,

to illumine the blind, and

to make his truth to reign among all peoples and nations,

to the end that the whole world may know

but one God and one Savior, Jesus Christ;

one faith, and one gospel.